Kotor is one of a kind city, which was proved when UNESCO put Kotor on its map. Now officially as a natural and culture-historical sight, it got the attention of travelers from all around the world.

So before we “take a look” at Kotor, let's get a geographical perspective.

Kotor is located in Bay of Kotor. And this bay is a part of very popular Boka Kotorska Bay, which consists of the Bay of Herceg Novi, Bay of Tivat, Bay of Risan, and Bay of Kotor. All together they make a great experience for those who love the sea (Adriatic sea in this case) combined with old stone-made houses, huge cultural heritage, while all surrounded by high mountains making it a very unusual looking bay.

This cultural heritage of Kotor is mentioned quite a lot and here is the best way to explain it. One of the first cathedrals, older than many other church temples in the world, was built in Kotor. The building of the Cathedral of St. Tryphon started in the 9th century after the arrival of the Slavs and ended in 1166. 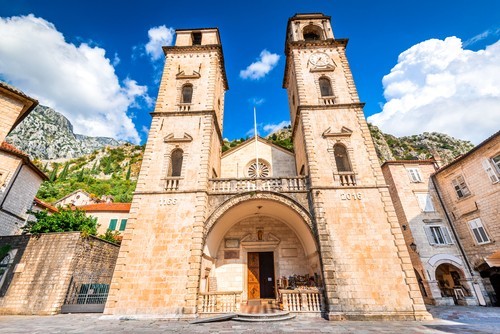 Kotor is situated on the south-east part of Kotor bay under the Lovcen mountain. The old part of the city was developed at little triangular space, surrounded by city’s wall reaching fortress of St. John (260 m). Kotor is surrounded by walls - almost 5 km long, 20 m high, and 2-15 m wide. There are two walls and both of them end near fortress St. John. From the city to the fortress there are 1426 stairs.

OUR LADY OF THE ROCKS "STORY ABOUT AN ISLAND"

This time around, by the power of words and photos we are taking you to a small city called Perast in the Bay of Boka.

The little town of Perast, a treasure trove of valuable works of the cultural, historical, and artistic heritage of Boka, is nestled in one of the most beautiful areas of Boka Kotorska, at the base of the hill of St. Elias. Its valuable monuments, churches, chapels, slender, bell-towers, the City Museum, exquisite palaces, balconies, and coat of arms have been well-preserved. As beautiful as Perast is, our attention today is not focused on Perast but on the sea in front of the city. The islands of St. George and Our Lady of the Rocks. The natural islet of St. George houses a 17th-century church of the same name, as well as the Perast cemetery, dating from 1886, and an ancient Benedictine abbey, from the 12th century.

Our Lady of the Rocks is a man-made islet, with sailors' votive shrine by the same name. The islet was built by constant heaping up of the stones that started in the middle of the 15th century, and has been going on, to some extent, to this day. The islet covers an area of 3030 m2. According to tradition, the painting of Our Lady in Perast becomes known in 1452. The building of the church on the rock is connected in this tradition with one of the Mortesic brothers' recovery from illness. They kept the painting in their house, after they found it one night, while out fishing, in the middle of the sea. To show their appreciation of the miraculous recovery, they took the painting to the church of Saint Nicolas. It was later decided to build a church on the rock near the islet of St. Elias, to honor Our Lady and house this painting. It is believed that the main altar of the shrine is situated on the very reef where the painting was found. The church is rather small and simply built of fine stone from the island of Korcula (Croatia). It is comprised of a nave and a chapel (an apse), covered with a dome. The interior of a church is an extravagant picture gallery. Sixty-eight oil-on-canvass paintings, hang on the side walls and the ceiling. The ceiling is painted with scenes from the lives of Mary and Christ, as well as images of evangelists and church elders.